“What is thy bidding, my master?”

The dark side of the Force corrupts all that it touches, twisting those who practice it into shells of their former selves. Such is the case with Anakin Skywalker. Once known as one of the strongest Jedi in the entire galaxy, Skywalker was seduced by the dark side and became an agent of evil determined to eliminate the last vestiges of his former order.

Now known as Darth Vader, Skywalker has become more machine than man as he scours the galaxy in an attempt to snuff out the embers of Rebellion. Soon, you’ll be able to harness his dark power on the battlefields of Star Wars™: Legion with the Darth Vader Operative Expansion!

Highly skilled with both a lightsaber and the Force, this miniature’s unit card is accompanied by three new command cards that can be used interchangeably with the command cards found in the Core Set, giving you even more ways to use both versions of this unit. Finally, four upgrade cards help you tap into Vader’s full potential with the Force and grant him even more battle training. Read on for a full look at the Darth Vader Operative Expansion! 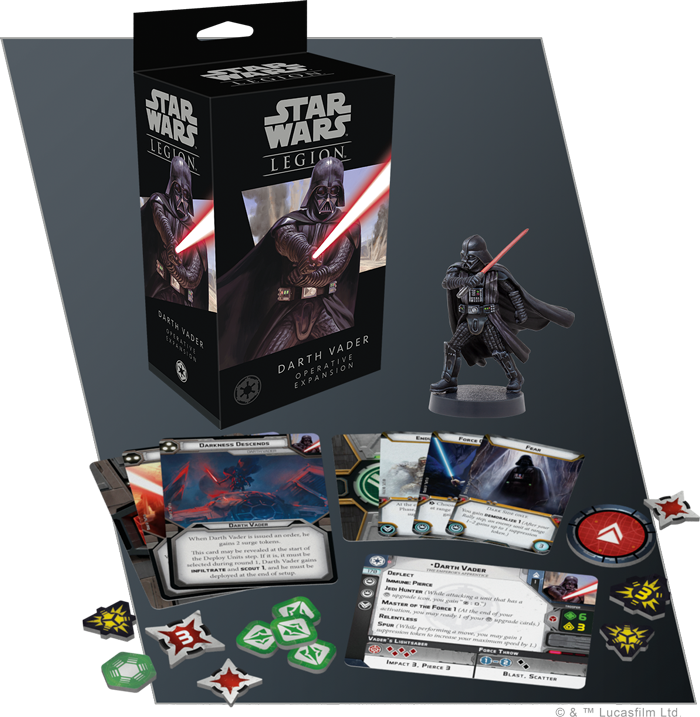 Despite Darth Vader’s great power, he is merely an apprentice to the true power in the galaxy: Emperor Palpatine. Dispatched to do the Emperor’s bidding across the galaxy, Vader will not rest until his master’s will has been carried out. Rather than command Imperial troops on the battlefield, then, this version of Darth Vader is more focused on personally eliminating any who would question the Emperor’s authority.

A central tenet of this plan is the eradication of any remaining Jedi Knights, a task Darth Vader particularly relishes. Relentlessly pursuing Force users to the far corners of the galaxy, Vader uses his hatred of the Jedi to make even deadlier strikes against them. While Vader’s lightsaber attacks don’t have quite the same damage potential as his counterpart in the Core Set, a combatant of Darth Vader’s stature is sure to draw enemy fire and, with a little Tenacity, this gap can be easily bridged.

But Darth Vader does not rely on his lightsaber alone. To him, the Force itself is a weapon. When his opponents are out of reach of his lightsaber, he can simply throw them with the Force as a ranged attack. Such an attack can deal damage, of course, but it has other advantages as well. Rather than randomly slamming his opponents to the ground, Vader can strategically place all the non-leader minis in a small base trooper unit after performing a Force throw, potentially pulling them out of cover and leaving them vulnerable to further attack.

A Force throw is just one example of how Darth Vader can benefit your entire army without directly commanding troops. With three new command cards to enhance his already prodigious skills, he can unleash the power of the dark side. Darth Vader’s mere presence on a battlefield is enough to fill enemy troops with Fear, but as this Darkness Descends upon a combat zone, Vader becomes even more prepared to fight. If it’s the opening stages of the battle, he can make his presence felt even more strongly, quickly advancing on enemy positions and forcing them into a confrontation with the Dark Lord of the Sith. 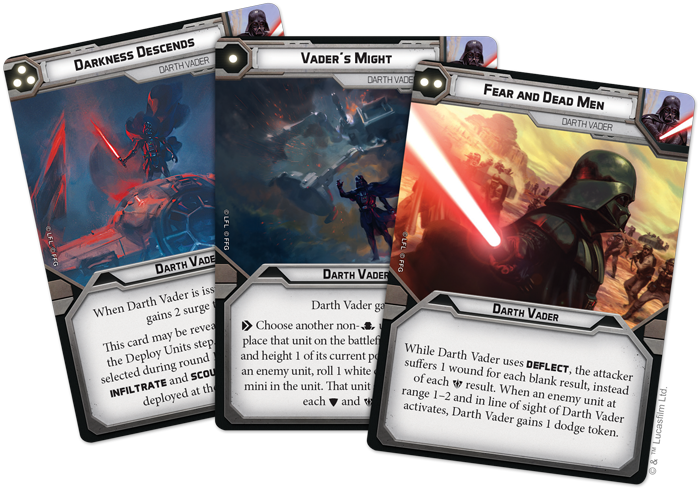 Not one to shy away from the front lines, Vader can always spur himself forward into the fray and with sufficient Endurance, he has little to worry from suppression tokens. If such an assault isn’t enough to demoralize opposing forces, perhaps witnessing the extent of Vader’s Might will be. With this card, Darth Vader can use his power to displace an entire unit, potentially putting a friendly unit in a more advantageous position—or pulling in an enemy so he can finish them off.

Even if the enemy thinks they have gained the upper hand on Vader, they will quickly discover that he is only surrounded by Fear and Dead Men.  This card gives him an even better chance of dealing damage as he deflects incoming blaster fire, making enemy units carefully consider whether they want to target him. 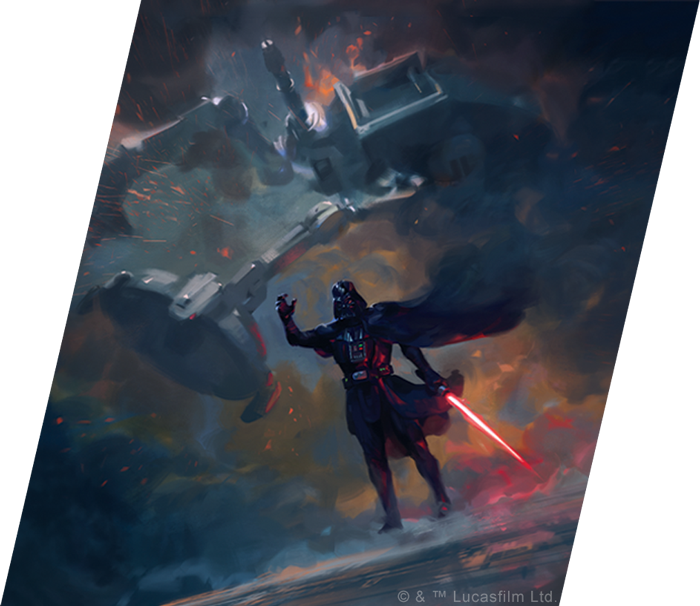 The Power of the Dark Side

Everywhere that Darth Vader goes, fear is sure to follow. Harness the power of this fear on the battlefield with the Darth Vader Operative Expansion for Star Wars: Legion!

“Never. I’ll never turn to the Dark Side. You’ve failed, your highness. I am a Jedi, like my father before me.”
–Luke Skywalker, Star Wars: Return of the Jedi

At the epicenter of the conflict between the Rebel Alliance and the Galactic Empire are two people bound by the Force, and bound by blood: Luke Skywalker and Darth Vader. On opposing sides of the Galactic Civil War, the conflict between Luke and Darth Vader isn’t just one of duty, but also family. Fittingly, these central figures of the Star Wars saga serve as the focus of the upcoming Star Wars™: Legion Prime Championships. With the impending release of the Clone Wars Core Set and the newly updated Rules Reference, it’s never been a better time to get in on the ground level and practice your tactics as a commander in preparation for these exciting events! END_OF_DOCUMENT_TOKEN_TO_BE_REPLACED

October Releases are being reported as:

Thanks for Steven Campbell on the Legion Facebook page for sharing the back of the upcoming Darth Vader Operatives card. Apparently a French player somehow got a hold of the card and leaked it out online.

END_OF_DOCUMENT_TOKEN_TO_BE_REPLACED 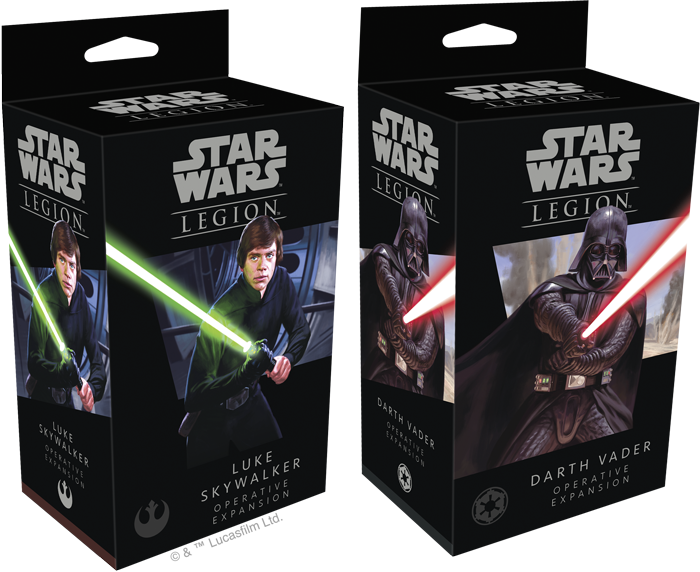 “The Force is strong in my family.”
–Luke Skywalker, Star Wars: Return of the Jedi

Order your own copy of these Star Wars: Legion Operative Expansions at your local retailer or online through our website—with free shipping in the continental U.S.—today!

The Force binds the Star Wars galaxy together, connecting all living things and granting those sensitive to its presence extraordinary abilities. Sometimes, this mysterious energy field flows from one generation to the next, bestowing its gifts on multiple members of the same family. Soon, two Force users sharing this legacy can join the battles that will determine the fate of the galaxy. END_OF_DOCUMENT_TOKEN_TO_BE_REPLACED

A couple new products may have been prematurely uploaded to the US Alliance website.

“May the Fourth be with You!

I’ll be running a special discount on new stl files through the 10th!

Without a doubt the battle damaged ‘dark father’ was my favorite model to sculpt, a lot of love when into this model.

I’ve also completed a squad of muddy liberators to fight off my previously released grunge troopers! (the squad leader has some fun lore attached to him)”

Come get them here!

For printed models go to shapeways:

END_OF_DOCUMENT_TOKEN_TO_BE_REPLACED

Wherever Darth Vader goes, fear is sure to follow. His foes scatter at the first sound of his mechanical breathing and even his own troops fear the consequences should they fail him. Wielding his lightsaber with deadly efficiency and unleashing the power of the dark side of the Force on those that stand in his way, few can match him combat. There is only one Darth Vader, and those who attend Star Wars Celebration in Chicago from April 11 – 15 will have the chance to add a one-of-a-kind version of the Dark Lord of the Sith to their Star Wars™: Legion armies.

Continue reading after the jump: https://www.fantasyflightgames.com/en/news/2019/2/27/the-power-of-the-dark-side-1/