These two units have been rumored for awhile but this pretty much makes them official. Last time this happened FFG was quick to release a preview article. Watch for that on official site either this week or next.

I did a quick write-up of things I found interesting during today’s FFG Live: Ask Me Anything with Alex and Luke:

-The Clone Wars Core Set will release worldwide on Oct 18th
-The Card Packs will release on Oct. 18th
-No release date for Dewbacks but will release ASAP
-More Competitive Battle Cards will be added to the game “Sooner than later”
-We may eventually get custom commanders
-We will see more cross faction units
-We will most likely see Commander Coby and all “popular characters” added to the game; at least that’s the goal
-Phase 1 Clone Troopers feature the furthest they could push PVC plastic. Phase 2 Clone Troopers will be hard plastic, but will not be as customizable as the Phase 1s, but as Legion continues to grow with hard plastic there will be some “really cool figures in the near future” and you’ll be able to “customize them in a lot of cool ways”
-They are moving away from 1 for 1 releases and moving towards more thematic releases, e.i. themes build on movies, TV shows, certain battles, locations, different media, fridge elements that don’t fit anywhere else
-They will consider all possible factions including Scum and Villainy. They hinted that The Mandalorian could help flesh that faction out
-Subfactions are still on the table, but it sounds like the game needs to grow more to warrant them END_OF_DOCUMENT_TOKEN_TO_BE_REPLACED 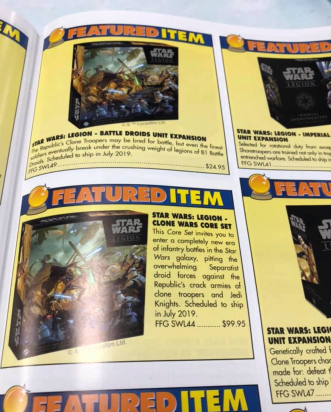 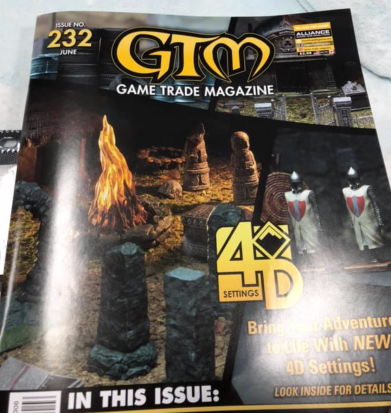 The most recent issue of Game Trade Magazine has the Clone Wars Core Set along with its accompanying expansions listed with a release date of July 31st.

Previously the Core Set was said to be released in the Fall.

With all of the recent confusion circulating around Star Wars Legion’s release schedule most are dubious with the July date.

The Downed AT-ST’s release has been wobbly at best, but what would you expect from something that can’t even stand?

The Battlefield Expansion is now listed as “On the Boat”, but this time it’s sailing with Sabine and Bossk who have spent months at the printers. (must be all of the extra arms and heads).

I have nothing to confirm this but I’m speculating a release for all three expansions on June 27th, but hoping for June 20th.

It was long speculated that Sabine and Bossk would be released this month but so far only the Downed AT-ST Battlefield Expansion has been announced for a May 30th release.

That being said there is some talk for an earlier June released for Sabine and Bossk. 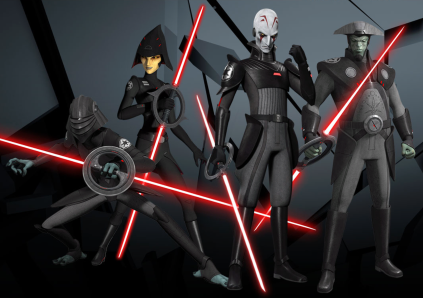 With the forthcoming Clone Wars core set I’m intrigued with how the current factions of the Empire, and the Rebellion will interact with the two new factions. What’s interesting is that these factions shouldn’t have answers for each other because they never actually faced each other in a star war. But in terms of the game they will need to have answers as they will frequently be going head to head with the CIS and the Republic.

Currently the Imperial faction is built to represent their presence during Galactic Civil War and their struggle with the Rebel Alliance. The advent of the Republic faction gives FFG the opportunity to dive backwards on the timeline during the Dark Times era and release units that will be more suited in fighting lightsaber wielding Jedi.

I believe it’s a safe bet that we’ll see the release of the Inquisitors and Purge Troopers as Imperial counters to the Republic faction’s Jedi. Though it’s highly unlikely we’ll ever see Imperial Clone Troopers or a pre Cyborg Darth Vader, it would be interesting if they eventually made an Order 66 scenario.

What do you think? Do you agree that we’ll likely see Dark Times/Jedi Purge units hit the streets Q4 of this year or Q1 of next year? How do you think they’ll balance the Rebellion vs the Republic? Or do you think Luke and Sabine are enough to combatant full fledge Jedi? With that being said, I’m 100% sure we won’t see Jedi swarm as they’ll most likely be too expensive. So an Obi Wan, Anakin, and Ahsoka list might not be feasible.

Just some thoughts, let me know what you think in the comments.

While being interviewed on The Fifth Trooper podcast, Luke Eddy mentioned that his current favorite list included a yet-to-be-announced Imperial Corp unit.

Speculation flew around the internet about what this YTBA could be!

Luke Eddy took to Twitter today to help clear up what he said while managing to throw even more fog on the subject.

END_OF_DOCUMENT_TOKEN_TO_BE_REPLACED

There has been some speculation going around whether Bossk is valued at 85, 115, or 135. If you put your money on 115 you win the pot. Luke Eddy confirmed today that Bossk is indeed 115 pts.

Also while on The Fifth Trooper and Notorious Scoundrels podcasts Eddy stated that his favorite list so far to play test was Krennic, 1x Death Troopers, 3x E-Webs and 6x yet to be announced corps units.

Pretty exciting stuff! My money is on the long fan requested Shore Troopers. But only time will tell.

I had the pleasure of meeting Eddy during LVO and I can confirm that he truly loves this game, and is a great, stand up gentleman.

Over the past few weeks we’ve gotten a wealth of future drops. Below are some speculated dates of when we should be seeing these drops dropping on store shelves. I should state that these dates are my speculation only and nothing official.