Snowtroopers are the Empire’s specialized assault unit focusing on hostile environments. They are trained and equipped to keep pressing forward even in the worst conditions. In Star Wars: Legion the Snowtroopers are the Imperials second corps unit option. Their trainining and equipment make them hardy and versatile against all odds – and as such see specialized use in the Imperial forces.

For 3 points and a gear slot this upgrade adds the Unhindered keyword to a unit, allowing them to move past difficult terrain without the speed penalty. 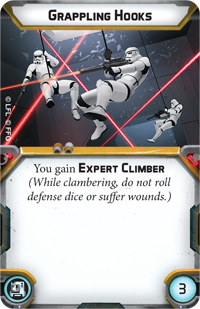 For 3 points and a gear slot this upgrade adds the Expert Climber keyword to a unit, allowing them to clamber without the risk of taking damage.

For 6 points and a gear slot this upgrade adds the Precise 1 keyword to a unit, allowing them to reroll 1 additional die when spending an aim token.

Star Wars: Legion is an objective based game. It does not matter how much of your force has been destroyed or how much of the enemy force you have destroyed; when the game comes to an end if you have one figure left and more objective points then your opponent, you win! For that reason understanding Mission Objectives is possibly the most important skill in SW:L.

In a competitive game you and your opponent both bring a deck of 12 mission parameters (4x of each: Objectives, Conditions, and Deployment) and will play a mini game to determine which mission is being played (often reffered to as turn 0). The player who’s list is the lowest points gets to chose if they are the red player or the blue player, and then the blue players scenario deck is used. Because there are more than 4 of each parameter there are some strategies when choosing which to include in your deck, and also when choosing which to keep and which to eliminate during the mini game to determine the actual mission played. Keep in mind that your individual play style and list composition will determine which mission parameters will favor you most. 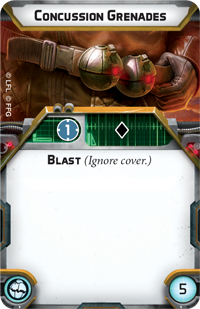 For 5 points and a grenade slot this upgrade adds a new weapon to the unit with one black die per figure at range 1 with Blast.

Rebel Troopers are the heart of the Rebellion, they are the front line skirmishers fighting to break the unjust tyranny of the Empire around the galaxy. In Star Wars: Legion Rebel Troopers are the Rebels first corps unit option. They are well rounded, adaptable, and efficient – and as such see use in the majority of Rebel forces. 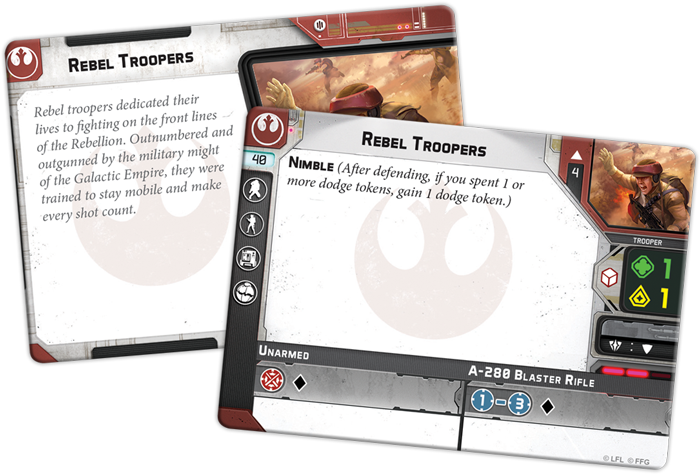 I intend for a major portion of this site to be dedicated to the analysis and discussion of individual cards (units and upgrades) and how and when to use them. Before we can do that though we need to break the game down a little bit into core components and figure out a baseline to compare other cards to.

Unlike X-Wing and Armada, Legion has variables that are outside either players control (mainly terrain density and placement), and there are many abilities that are difficult to quantify (such as range, speed, board position, line-of-sight, figure volume, etc). Some units perform better or worse from game to game depending on how these factors interact.